From Gateway to ProDIGI – The Benefits of Naming Your Salesforce System 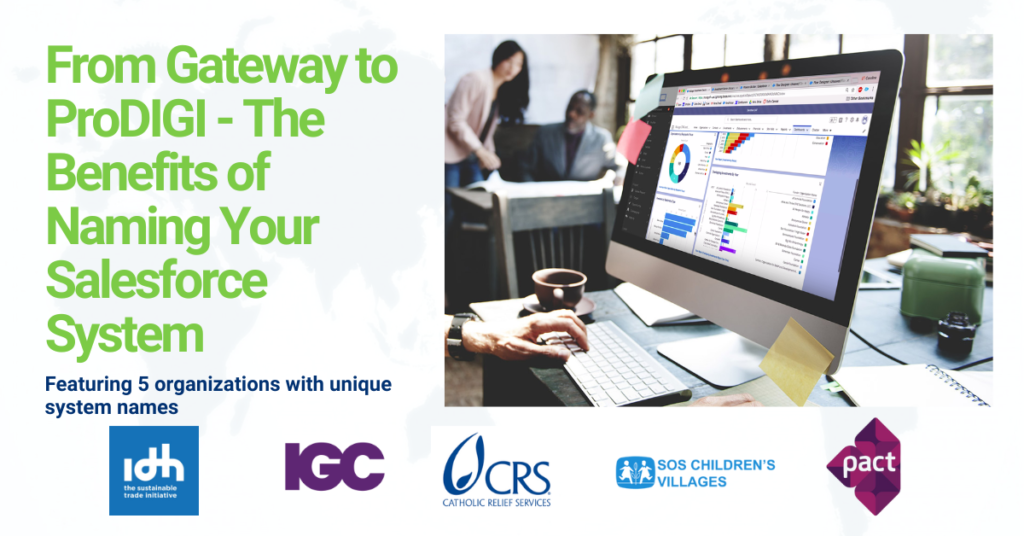 Over the last 12 years, Vera Solutions has implemented 500+ Salesforce systems for social sector organizations around the globe. We’re often asked, “What factors lead to successful system adoption?” Indeed, there are many – from the solution’s flexibility and user-friendliness to thoughtful system governance and proactive change management. One factor you might not expect is giving your system a name. It may seem like a trivial detail, but naming your system helps users identify with the technology, reinforces your organizational culture, and generates an underlying sense of ownership for the system. Some organizations select a name that embodies their mission (such as Pact’s Promise), while others opt for a catchy acronym (like the International Growth Centre’s SPEAR). Here are five reasons why we encourage our clients to name their Salesforce systems, along with a few real-world examples to get you inspired.

See our success stories with leading organizations across the globe

1. It reinforces your brand or mission

A system can serve as an extension of an organization’s brand – with some organizations choosing a system name that resonates with their mission, vision, and values. One example that stands out is Pact’s Promise system. In 2015, Vera Solutions worked with Pact to develop a user-friendly Salesforce-based project management system, which they named “Promise.” With staff dispersed around the globe, Pact’s Promise system created a central location to manage and collaborate on the hundreds of projects and sub-awards they manage annually. The name Promise evokes Pact’s mission to assist underserved populations around the world by providing access to healthcare and social services. Today, the system is being used in more than 30 countries to track nearly 700 projects and over 5,000 subgrants.

"Our previous system didn't have a name, it was just a CRM but part of this process with Vera was to shift the mood towards this system to something more positive so we involved country offices in the naming of the system and how we built it out. When we thought of a name for the system, Promise was something that resonated with our mission and vision. At Pact, our tagline is 'a Promise for the future'. Building local promise around the world and giving people hope for their future is Pact's mission and we commit to leaving behind thriving, resilient, engaged communities that build local promise".

Associating a name with a data system attaches a certain personality to it; it becomes something one identifies with in daily work, almost like another team member supporting the daily delivery of work. Anecdotally, we’ve seen stronger adoption of named systems compared to ones just referred to as “Salesforce” or “Amp Impact”. This likely stems from a subconscious sense of ownership of/or identification with the system (as opposed to feeling like it’s someone else’s). We’ve found this is especially true if you include your team in selecting a name via a competition or survey. When you include your team in the journey of brainstorming and selecting a system name, it generates hype and becomes something with which your team will look forward to engaging.

Timothy Fives, former Senior Manager of Global Knowledge and Information Management at Catholic Relief Services (CRS), credits naming CRS’ system as a key success factor for encouraging user buy-in. “CRS’ [Salesforce system] had always been called Gateway overseas, but it never caught on in the US,” he shared on a webinar in 2020.

“As we started to think about naming conventions across the organization, the US side also picked up on the term Gateway. That to me was a big win and a huge example of the organization coming together and convalescing around the platform, the name, the data, and the ability to tell stories about our work.”

CRS went even further in naming the effort that went into rebuilding their system, “Project Marvel” after the superhero comic books. Project Marvel helped foster excitement around the extensive process of rebuilding and relaunching CRS’ Salesforce system. The organization started to build momentum around the name and found some joy in this process, which then echoed throughout the organization.

It takes time and training to learn a new system. As users get excited to engage with a system, it often leads to increased hours of learning and investment in digital literacy. Simply naming a system can help spur creativity and make learning fun.

In 2019, Vera Solutions partnered with SOS Children’s Villages International (SOS CVI) to implement ProDIGI, a system for program management and impact measurement built on Amp Impact and the Salesforce platform. “ProDIGI” is a play-on of the word “prodigy” – a person with exceptional qualities or abilities and a mash-up of Project Digitalization. In keeping with this theme, each of the seven ProDIGI releases is named after a prodigious individual, such as Sindarov after the Uzbek chess prodigy and Mozart after the prolific Austrian composer (cleverly released on Mozart’s birthday, January 27th). Today, ProDIGI is used by more than 800 people in over 100 countries around the world to manage their projects.

4. It fosters a sense of community

A Salesforce system is not just a database; it’s a place where staff convene to connect, share knowledge, and glean insights about their work. Therefore, naming your system can help foster a sense of community within your organization. At Vera Solutions, we’ve always called our Salesforce system ‘Veraforce’.

"When we run training internally or when we talk about our own system to clients or prospective clients, there’s a certain sense of pride and ownership that comes across in introducing Veraforce. If you were a fly on the wall at Vera, you’d often hear staff say ‘oh, let me check Veraforce’ or ‘don’t forget to log that in Veraforce.’ It sounds more ‘ours’ and more legit than just telling people to check Salesforce.”

The International Growth Centre (IGC) is an economic research center based at the London School of Economics and operated in partnership with the University of Oxford’s Blavatnik School of Government. IGC provides research funding on the theme of sustainable economic growth and collaborates with governments to generate research and policy advice. In 2019, Vera Solutions worked with IGC to launch SPEAR, the center’s System for Policy, Evaluation, and Research. SPEAR enables users to centralize and visualize the projects IGC is funding in one place for the first time. It is integrated with IGC’s existing financial system to ensure payments are accurately tracked against projects in real-time.

There is simply value in naming your system to inspire belief – in your team, in your vision, in your everyday work. IDH is a global social enterprise that brings together over 600 businesses and governments to drive new sustainable production and trade models in emerging economies. Vera Solutions partnered with IDH in 2020 to build a central M&E and project management system called Rosa. IDH named their Salesforce system Rosa after American civil rights activist and the “mother of the freedom movement,” Rosa Parks. Rosa evokes a representation of IDH’s inclusive approach to stakeholder management, as it is used to manage all stakeholder data. With Rosa–a central source of truth for program decision-making–IDH can better focus on enhancing its mission to drive impact on the Sustainable Development Goals (SDGs) and create value for all.

Vera Solutions provides flexible and scalable solutions that empower organizations to become more transparent, accountable, and effective by building on Salesforce. Vera Solutions has worked with more than 365 organizations, strengthening their systems and building their capacity to collect, manage, analyze, and utilize data – whether for impact measurement, project and grant management, or CRM. 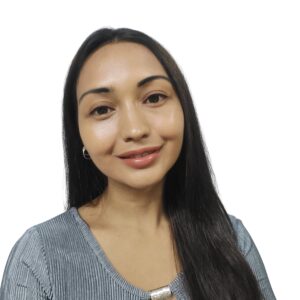 Zeenat Vallie (Digital Marketing Associate) has experience building online communities through content and digital marketing in South Africa and the United Kingdom. She served as a Social Media Account Manager for a leading digital marketing agency working on multiple brands across a range of industries, including health and wellness, B2B, B2C, education, travel, technology, and more. She also has experience as a Content Producer for one of the top media houses in South Africa and has worked in the local government sector. She holds a BSocSc with a triple major in English Literary Studies, Media and Writing, and Gender Studies from the University of Cape Town, and a formal certificate in Digital Marketing. 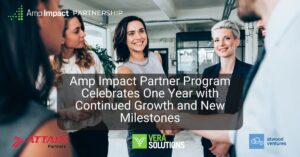 Over the last year, the Amp Impact partnership program has continued to grow through the partnership with Atwood Ventures and 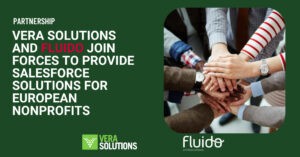 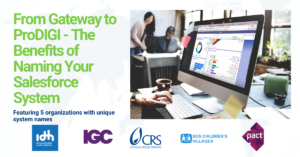 From Gateway to ProDIGI – The Benefits of Naming Your Salesforce System

Over the last 12 years, Vera Solutions has implemented 500+ Salesforce systems for social sector organizations around the globe. We’re